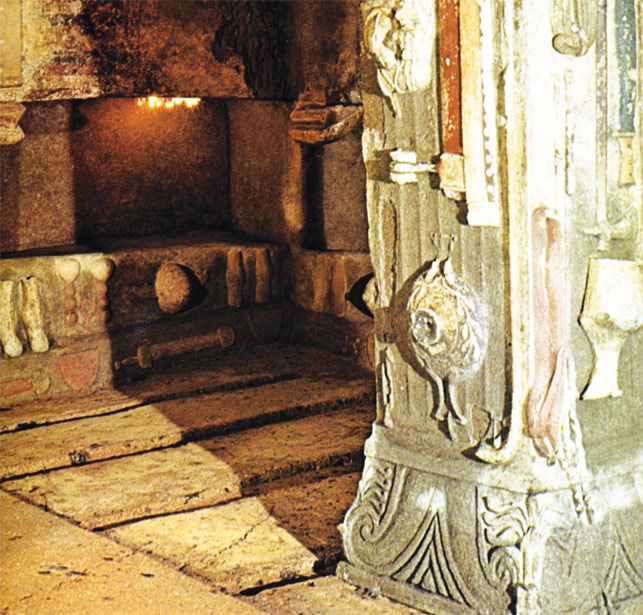 The Etruscans attributed great importance to the cult of the dead, because it was also a means of asserting the prestige and power of a family. We can distinguish different periods in this cult and its development is also reflected in the typologies of the necropolises. In the earliest times, the Etruscans were closely attached to the conception of the continuation of a vital activity by the deceased after death. The tomb was thus built like a house and given furnishings and decorations, both real and reproduced in miniature. Sometimes the walls were frescoed with scenes from daily life or the most important, serene and pleasant moments in the deceased’s life.

In the same way, cornices, beams, ceilings and frontons, intended to reconstruct the home environment, were painted or sculpted in the rock. The most ancient examples of monumental tombs were built on the model of the dwelling then in use: a hut with a round or oblong floor-plan. These circular tombs were built using large blocks of stone and covered with a false dome obtained from the progressive inward projection of the rows of blocks until a last slab closed the roof. Access to the sepulchral chamber was through a short corridor where offerings of food or furnishings were often placed. When this type of tomb was abandoned, tombs excavated underground, first of all with a single room and then with several chambers, were used.

The tombs excavated completely underground, generally in hillsides, are defined as “hypogeal” tombs, whilst those excavated in flat land and covered by soil and gravel are known as “tumuli”. This new type was characterized by a central chamber accessible from a long passage beyond which there were other chambers. The floor-plan could be very complex with a passageway, lateral chambers and a central hall with columns and benches.

At times, the tumuli assumed monumental dimensions, with a diameter of over 90 feet and they often contained various tombs of members of the same family. Examples of the first period can be seen in Cerveteri and can be linked to the evolution of the dwelling typologies contemporary with the necropolis (second half of the 7th century BC) when houses were divided into two or three rooms flanked and preceded by a sort of vestibule or built around a central courtyard. From the mid 6th century BC and throughout the 5th century BC, there was another change in the plans of the necropolises. The new tombs were called “cubes” and were built side by side in rows, forming real cities of the dead with streets and squares. Inside the tombs there were only two chambers, and outside there were lateral steps leading to the top of the cube where there were altars for worship. This change reflects a profound modification in the social structure, with the establishment of a non-aristocratic class encouraging less ostentatious houses. Furthermore, due to the influence of the Greek world, the basic conceptions regarding the destiny of the dead had also undergone a change. The primitive faith in the “survival” of the deceased in their tombs had been replaced by the idea of a “kingdom of the dead”, imagined along the model of the Greek Avernus.