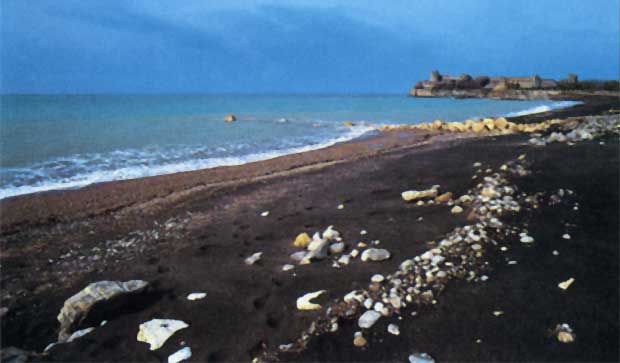 View of the coast near Pyrgi

The port represented an area of great economic dynamism and cultural liveliness. Often, for reasons of defence, the cities were not built on the coast but slightly inland. It was thus that the most important cities had ports, for example Pyrgi for Caere, which developed to the extent of becoming themselves well-known and important centres.

The ports, in addition to receiving commercial and military traffic, were the gathering point for a numerous fleet of small boats used by fishermen, as the waters of the Etruscan coast were famous for the abundance of fish to be caught there. In the first phase of their history, the Etruscans were a sea-faring people respected in the whole of the Mediterranean. Due to the lack of instrumentation and the fragility of the vessels, which could not withstand storms, navigation was as close as possible to the coast and only during the day.

At night, the cargo boats cast their anchors in sheltered places, whilst the war galleys were hauled by their crews on to the shore. The sailors of the period used the stars and their knowledge of the conformation of the coasts to guide them. Portolanos did exist but they were not commonly used.