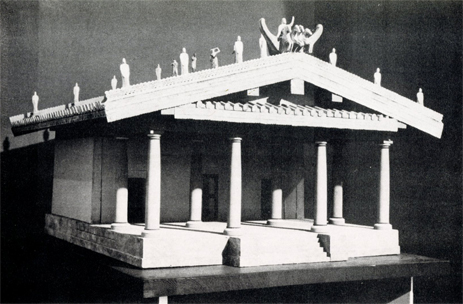 The Etruscan temple, for the building of which precise rules were established, was characterized by an almost square floor plan. The front half consisted of a gallery with columns, the rear half was occupied by three chambers, which housed the statues of three divinities or by a single chamber flanked by two open wings.

Except for the basement and foundations, light and perishable materials were used: unbaked bricks for the walls and wood for the structure. The temples had very wide and low double sloping roofs, with considerable lateral projection and the façade was dominated by an open or closed triangular fronton. The roof was completed by a complex system of terracotta decorative and protective elements, painted in bright colours and in full relief. These elements included the acroteria, which were placed on the top of the temple and at the corners of the sloping roofs, and the antefixa, which were positioned on top of the roofing tiles.