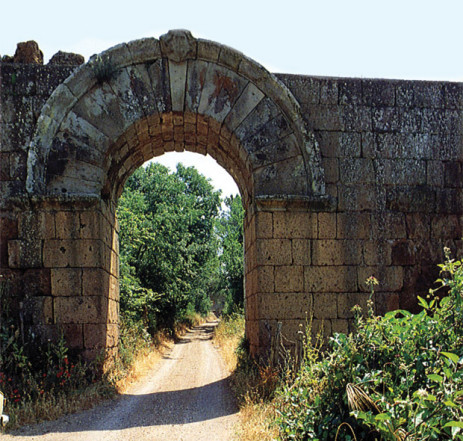 Etruscan Arc at the Jupiter Gate in Falerii, Viterbo

The most typical form of dwelling of the ruling class was characterized by a large central courtyard which gave access to various rooms. Another typology of dwelling consisted of adjacent rooms that opened on to an entrance hall.

Buildings were not high and were constructed with a base of square stone blocks. From this rose the walls built of rows of clay blocks or unbaked bricks or pebbles in a wooden latticework and plastered with clay. Sloping roofs covered with tiles were the most typical form of roof but terraced roofs were also to be found.

The outside of the house was richly decorated with polychrome terracotta and indoors the walls of the rooms were frescoed with geometric patterns or figurative scenes.