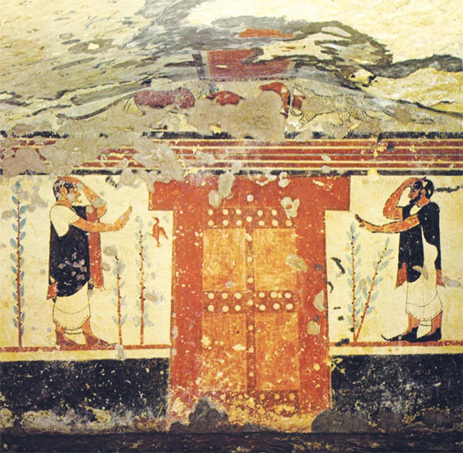 In the most ancient times, the Etruscans believed in some form of earthly survival of the deceased. This led to the need, as a respectful form of tribute, of ensuring a burial-place for the dead and giving it elements reminiscent of the world of the living.

The tombs were therefore built to resemble the houses of the deceased, both regarding its architecture and furnishings. Together with the body, personal effects and precious belongings were buried, as well as clothes, jewels, arms and objects of everyday use. Scenes with a strong vital significance were painted on the walls of the tomb, such as banquets, athletic games and dances. From the 5th century BC onwards, the conception of the world of the dead was strongly influenced by Greek civilization. The idea of an afterlife thus began to take shape, located in an underground world, where the souls of the dead transmigrated, inhabited by infernal divinities and the spirits of ancient heroes.

The passage between the two worlds was seen as a journey that the deceased made escorted by infernal spirits. The most important of these spirits was the goddess Vanth who had large wings and bore a torch; the demon Charun, with a disfigured face and armed with a heavy hammer and the demon Techulcha, with the face of a vulture and donkey’s ears, armed with snakes. The destiny of every deceased person was thus to be taken to a world without light or hope in which the passing of time was marked by the suffering of the souls as they remembered the happy times of their earthly lives. The sufferings of the souls of the dead could be alleviated by their relatives with rituals, offerings and sacrifices. Particularly illustrious figures could be beatified or, in exceptional cases, deified, through special ceremonies.