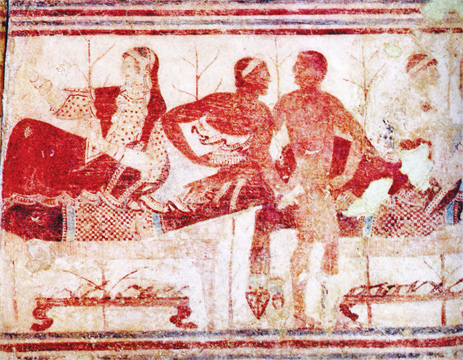 The banquet so often reproduced in tomb frescoes had a double meaning for the Etruscans. It was a religious ceremony in that the relatives of the deceased took part in a banquet, as part of the funeral ceremonies, and they believed that the spirit of the deceased was also present.

In addition, in daily life, it was a symbol of wealth and marked membership of a social Èlite. It was in fact only the aristocratic class that could afford to give magnificent receptions, where the guests, high-ranking men and women, would lie in pairs on convivial couches, served by numerous slaves, whilst musicians and dancers accompanied the banquet with music and dancing.

The tables were covered with embroidered tablecloths and laid with rich dishes; the food was plentiful, with meat, in particular game, vegetables and fruit.