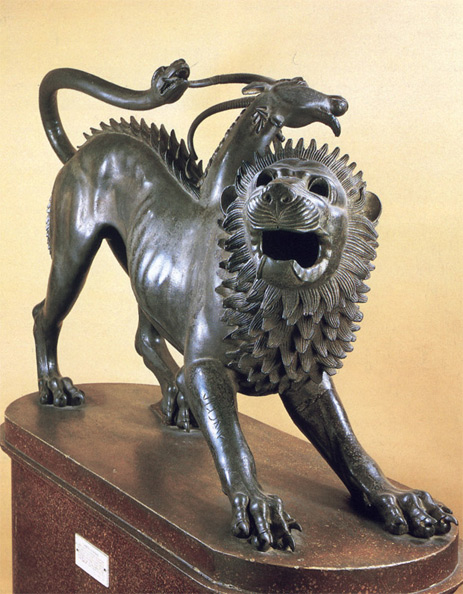 Art for the Etruscans was always linked with daily life and had a practical more than an aesthetic purpose, to the extent that it is often referred to as artistic handicrafts. The Etruscans drew the majority of their subjects from Greek art, but they reworked them in more immediate, popular and decorative expressive forms. It was therefore a spontaneous art, which aimed at intensity of expression even at the cost of deforming natural reality. As far as painting is concerned, we have to talk of sacred art, as the paintings that have been found, the greatest number in the tombs at Tarquinia, are those which decorated the walls of the burial places.

Two distinct phases can be distinguished in pictorial representations. The first is characterized by extremely realistic representations, with the aim of giving a vital message with banquets, games, athletic contests and dances. These are serene and pleasant episodes, with decorative elements reconstructing the domestic environment. The second period became established between the 5th and 6th centuries BC, when the idea of the transmigration of the soul to the kingdom of the dead became popular. Mythological scenes then began to be dominant, with images evoking the world beyond the tomb and the demons that lived there. Etruscan painting usually tended to perpetuate standardized patterns, produced by painters who were skilful craftsmen rather than artists.

Typical features are the centrality of the human figure which dominates the setting; the use of solid and strong colours, which fill in areas outlined by thick lines using the fresco technique. For sculpture too, we have to talk of sacred art, as the discoveries consist of decorative elements of temples or tombs. Etruscan sculpture is closely linked with the modelling of clay. Stone sculptures also show traces of this fundamental technique and Etruscan sculptors indeed preferred working with soft stones. Etruscan sculpture is distinguished by the total absence of formal research. It is not of any value in itself as a work of art, but is of value for the practical meaning that can be given to it. The Etruscans were famous amongst their contemporaries for their bronze sculptures, which they produced using special casting processes. Although not much has come down to us, only some unique pieces such as the Chimera of Arezzo, the Capitoline she-wolf and the Haranguer, we can get an idea from these of a finely advanced art which remains a total mystery for us.