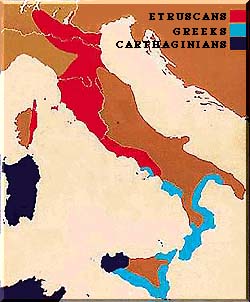 The origins of the Etruscans have been a subject of discussion since the most ancient times.

The Greek historian Herodotus, who lived in the 5th century BC, upheld the theory that they came by sea from Lydia, a region in Asia Minor. According to other historians of the classical age, the Etruscans were believed to be a population of Italic origin, who had lived in the peninsula since remote times.

However, the theory that has emerged in modern historiography is that of groups from the eastern Mediterranean, who brought with them a technically and culturally advanced society and who mixed with the resident Italic population around the 10th century BC, giving rise to a new civilization.

From the 8th century BC onwards, the Etruscans represent the first Italic civilization with the necessary energy to undertake a policy of expansion, generated more by the frenzy of economic growth than by a conscious desire for power.

Without meeting any organized opposition, between the 7th and 6th century BC, the growth of Etruscan influence covered a vast area of the Italian peninsula, from the plain of the Po in the north to Campania in the south.

With their products, Etruscan merchants reached all the Mediterranean ports and were everywhere rivals, and not always peacefully, with the Greeks and Phoenicians.

The Etruscans achieved the peak of their military and commercial strength around the middle of the 6th century when, after having occupied the ports of eastern Corsica, they became the acknowledged masters of the Tyrrhenian Sea.

During this phase of territorial expansion, the Etruscans came into conflict with the Carthaginians, their traditional allies, and the Greeks of the colonies of southern Italy, fiercer adversaries, whilst in the north, the Celts, divided into tribes and culturally backward, did not represent any real threat.

Allies of Carthage, the Etruscans had been able to dominate the Greek colonies in the south of Italy, successfully opposing their expansion both on land and at sea.

From the second half of the 5th century BC onwards however, the situation changed radically. Whilst the Etruscan cities had reached the peak of their economic development, the Greek colonies were undergoing a period of overwhelming cultural and political growth.

On the border between Etruria and Latium, a new and consistent danger had also appeared: the city of Rome which, once dominated and ruled by an Etruscan dynasty, had gained its independence, and gone on to the attack.

The decline of the Etruscans began at sea in 474 BC, when the Greeks of Italy, led by the city of Syracuse, defeated them at Cuma in a decisive defeat. After this, they lost control over the Tyrrhenian Sea.

On land as well, the situation rapidly deteriorated, and in less than a century Etrurian Campania was conquered by local populations, whilst the Etrurian plain of the Po was invaded by Celts from the northern side of the Alps.

From the mid 4th century BC, the once flourishing commercial and military power of the Etruscans was thus reduced to city-states which retreated into their original territories in central Italy. In the end, they also participated in the final struggle against the newly born Roman power during the 3rd century BC.

The proud city-states, lacking a strong national identity, were not able to co-ordinate any real resistance and were thus defeated one by one. With the loss of political independence, the cycle of an ancient people who for centuries had been the cultural and economic leaders of the western Mediterranean came to an end.