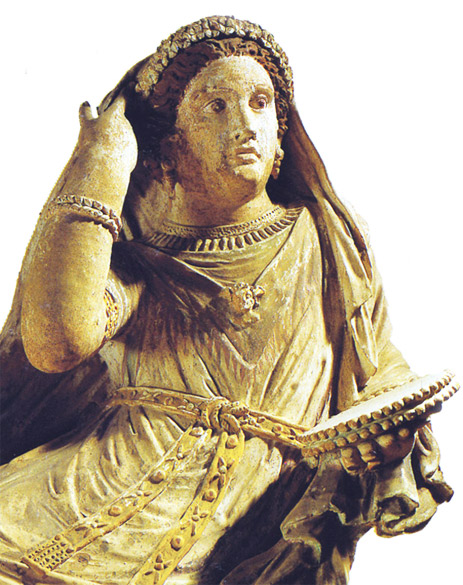 From the 6th century BC, the dress of the Etruscans is reminiscent of that of the Greeks. In the archaic period, men went bare-chested but later a short tunic came into use, with a coloured mantle thrown over the shoulders.

This mantle, fuller and embroidered, then became the Etruscans’ national garment: the tèbennos. Women and the elderly wore long tunics reaching the feet. These were usually made of a light pleated material and were decorated at the edges; heavier and coloured mantles were worn on top. Skirts, shifts and bodices were also found amongst the items of women’s clothing. The commonest type of footwear were sandals, high boots and a characteristic shoe, of Greek or Oriental origin, with an upward pointed tip. The most common headgear was a woollen cap, but there existed many different shapes: pointed, conical, hooded and broad-brimmed; often they identified the specific social class the wearer belonged to.

From the 5th century BC onwards, the habit of going bare-headed prevailed. It was also from the 5th century that the men, who previously wore beards, began to shave and wear their hair short. Women had various hair-styles: long hair in a ponytail or in a braid down the back; later they left their hair loose in curls on the shoulders and also gathered up in a chignon on their head or in nets and caps. Dress was completed by jewellery of excellent workmanship, such as earrings, necklaces, bracelets, fibulae and pectorals. Etruscans were experts in the production of these items.