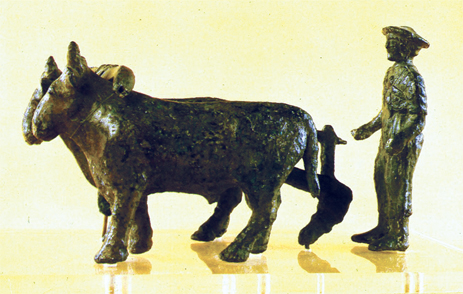 The rural landscape of Etruria was and still is characterized by a succession of hilly areas covered by thick woods, rich in water. In the southern part, alongside the hills there are also lakes of volcanic origin surrounded by mountainous areas. The distribution of the territory was at the basis of the birth of the Etruscan people: the borders of property were considered sacred and inviolable, and accurately marked by stone blocks. The first agricultural activities were the cultivation of wheat, barley, millet, broad beans and lentils. The territory, with abundant grazing land, was also suitable for livestock raising: the commonest species were cows, pigs and sheep, to provide food and work and horses, used for transport and in battle.

Contacts with Greek culture brought many benefits to agriculture: crop rotation; the vine was introduced in the 7th century BC, becoming widespread and producing wines exported throughout the Mediterranean and from the 5th century BC olive-trees were grown. The Etruscan territory was famous for its fertility and this was due both to its geological characteristics and man’s intervention. The Etruscans were in fact capable of major works of civil engineering, such as aqueducts excavated in the rock, changing the course of rivers, reclaiming large areas of marshy coastland, forming a dense network of canals for irrigation purposes and roads, even built in the sides of mountains.

The fauna of the inland, hares, boars, birds and deer, that lived in the wooded areas, provided plentiful game. The forests also guaranteed the timber necessary to build ships and was used by the metal industries as fuel. Rich in metals, the region of the metalliferous hills and the island of Elba were in fact a very valuable economic resource for the Etruscans, both from the commercial and military points of view. For centuries, copper, iron, lead and tin were extracted from mines located in their lands.