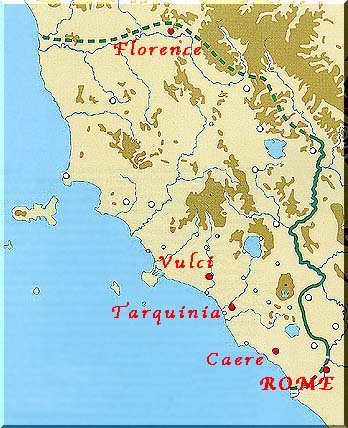 Inland Etruria and the Etruscan nation

Inland Etruria, located in modern-day Tuscany, Umbria and northern Lazio, can be divided into two areas.

The coasts of both these regions are a series of sandy shores, rocky promontories, lagoons and marshes.

The twelve cities, which according to tradition, made up the powerful twelve-city Etruscan league, stood in this territory.

The Etruscans were a culturally homogeneous group of independent city-states which, during the various historical periods, succeeded one another in leading the process of commercial and territorial expansion.

The different cities often made pacts of a military or economic type but there was no lack of conflicts and jealousy.

The reasons for the military defeats of the Etruscans against neighbouring peoples are to be found in this scarce capacity for coordination. These defeats led to economic decline in the first place and subsequently to the disappearance of the Etruscans as a political entity.

Once a year the representatives of the Etruscan peoples met at the Fanum Voltumnae, a sacred place, the exact location of which is still unknown, in the territory of the city of Volsinii (modern-day Orvieto).

Here the representatives of the twelve cities dealt with political and economic affairs and worshipped their common gods. An important market was held at the same time as the religious celebrations and the political meetings, attracting people from all the surrounding territories.

The territory controlled directly by the Etruscans included vast properties in Campania from very remote times. This region was in fact a natural point of passage on the commercial routes to Sicily and the eastern Mediterranean, as well as a point of departure for military expeditions. The strategic significance of dominating this region was therefore considerable: possessing this region meant controlling access to the Tyrrhenian Sea.

Etruscan settlers colonized the area from the 7th century BC, first of all along the coast of the Gulf of Salerno and then they expanded their control to the whole of the plain of Campania, at the rear of the Greek colonies of the Gulf of Naples.

Enriched by commercial trade, prosperous cities gew up, the most important of which was Capua.

The commercial and military confrontation with the Greek colonies of the south of Italy lasted for a long time without either side emerging either victorious or defeated, until the Syracusan fleet inflicted a harsh defeat on the Etruscans in 474 BC near Cape Miseno. Having lost control of the sea, the trade of the Etruscan cities of Campania rapidly collapsed, and with it their economic wealth.

Furthermore, Syracuse, the most powerful rival, had come into possession of the key to the Tyrrhenian Sea. It was thus that in 453 BC, a fleet from the Sicilian city devastated, with no opposition, the commercial ports of Etruria; Etruscan power was now in full decline.

Shortly after that, Etruscan Campania was to be definitively crushed by the local Sannitic populations. In 430 BC, with the fall of Capua, Etruscan domination of the region came to an end.

The Etruscan plain of the Po

Under the impetus of economic growth and following commercial routes, the Etruscans, in the 6th century BC, crossed the Appennines going north and began the colonization of the plain of the Po. According to legend, twelve cities gew up in the region, the first being Felsina (modern-day Bologna). Already familiar with the region through trade, the Etruscan colonizers did not encounter any rivals capable of offering resistance.

The fertile plain of the Po represented very favourable land for the advanced methods of Etruscan agriculture and a major point of passage to reach markets lying on the other side of the Alps.

This prolific ramification of the Etruscan kingdom was to last only a short period of time. As early as the first decade of the 4th century BC, Celtic populations continued to arrive from north of the Alps looking for fertile lands where they could settle. They gradually chased out the Etruscans from the territories the latter had occupied and destroyed their cities.

By mid-century, only a few small centres on the Adriatic coast resisted, but by then Etruscan control in the plain of the Po had waned forever.